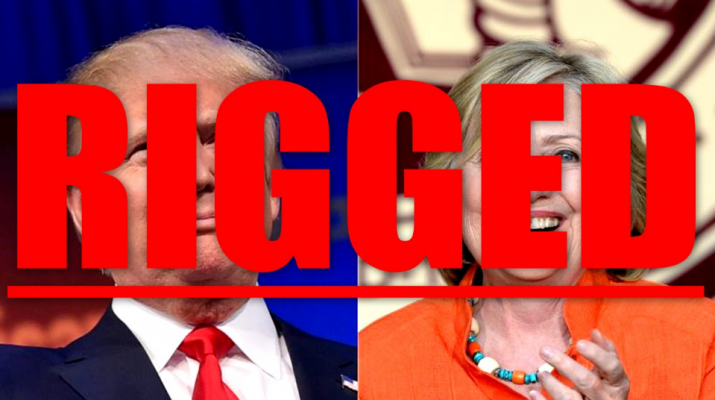 The USA has never seen a presidential campaign season like 2016.

Nor will the nation ever see another one like it.

On the one hand, the mainstream media (MSM) has worked triple time to misrepresent the words and actions of Candidate Trump at every turn of events.

On the other hand, the MSM has aggressively promoted Candidate Clinton in spite of her high crimes and multiple misdemeanors, financial frauds and political transgressions.

It’s as though the real criminal can do no wrong … and the rare honest broker can do no right in the eyes of the press, the intelligentsia, the establishment and both main parties.

Exposure of a rigged system

Of course, there are many unintended consequences for those who are working hard in the background to rig the electoral system in 2016.  Not only have these stealthy operators been working extremely hard to overturn the will of the American people, they are also committing massive fraud in broad daylight.  The very same crowd stole the Democratic primary from Bernie Sanders… with his help, of course!  And everyone now knows it.

In the present case the same cabal of politicos is perpetrating so much criminal activity against the U.S. citizenry in an effort to steal a victory for Clinton that the whole world is now aware of their naked treachery.  In point of fact, no one has ever seen so much outright fraud and transparent law-breaking, and this patently unlawful conduct will only intensify until election day.

The upshot is that We the People are watching everything — in real time — and just how much manipulation of the electoral process will occur to steal this election.  We are witnessing election crime-in-process like never before in US history.  This, by the way, is a very good thing for all parties concerned.   Because only through such egregiously fraudulent behavior will the body politic understand the profundity of the Democratic Party’s collective psychopathy.  Yes, the Republican Party has been equally as guilty over the years, but the 2016 election will be the Democrat’s to steal.   In reality, these politicians have been operating as career criminals since they first took office and their other prominent positions of power and influence.

It is now certain that Trumpophobia has gripped the establishment throughout every sphere of society. Never before have the NWO globalists ever been so afraid of a presidential election outcome.  That numerous GOP heavyweights are staying home or voting for Clinton is as unprecedented as it is shocking.  This simply is NOT supposed to happen—EVER!

Clearly, the 1% has never been so friggin’ scared of a real populist taking a wrecking ball to their multi-decade crime spree.  By all authentic accounts Donald Trump does appear to be the perfect wrecking ball as he swings throughout the concrete and steel canyons of Wall Street and K Street alike.  His positions on TPP and TTIP especially wreck the NWO plans for complete globalization of the world economy.

In fact Trump has already done some major damage to Bill Clinton’s signature ‘achievement’ known as the disastrous NAFTA.  By revealing that single greatest threat to the American economy, he has shown it to be the real catastrophe that it has been since 1994.  Trump has also exposed both Bill and Hillary Clinton as dyed-in-the-wool globalists who only serve the interests of an international crime syndicate.

Much most importantly, however, Trump has drawn the stark battle lines between the treasonous elected officials and appointees in the U.S. Federal Government (e.g. FBI Director James B. Comey, Attorney General Loretta Lynch and Director of Homeland Security Jeh Johnson—see videos posted below) and the patriots who have not yet been fired or retired, killed or imprisoned, injured or sickened, or suicided or forced into whistleblower status.

The real problem for Trump is that, with each truthful utterance, the ever-growing New World Order conspiracy that is represented by the “Deep State + Obama Administration + Clinton Campaign + MSM Propaganda” reacts with greater ferocity.  No matter what Trump says or does, the MSM has been given strict orders from the C.I.A. to spin it as a profound negative.  Trump could liquidate his holdings today and feed the entire continent of Africa and this nefarious crowd would somehow twist it for Clinton’s benefit.

In the meantime Hillary has been let off the hook for one crime after another.  Genocide, war crimes, crimes against humanity, first degree murder, grand theft on a grand scale, RICO violations, high treason, 9/11 government conspiracy, Oklahoma City bombing conspiracy, Waco Branch Davidian Compound firebombing conspiracy … the list goes on and on and on.

Donald Trump has killed no one.  He has not stolen from anyone.  If he had, the MSM would have splashed it all over the front pages of their tabloids.  Trump has not committed treason of the highest order, nor is he guilty of any war crimes.  Clinton’s rap sheet is literally endless.  Which is why the Deep state has gone into high gear to distract from her many acts of pathological criminality, and instead focused on his totally engineered media gaffe, that really didn’t happen.

Trump Against the Global Power Structure

Let’s face it; it is now a case of Trump against the global power structure that is controlled by the World Shadow Government.  There are even those plants who have joined his campaign who are not really working for him.  The ‘plagiarized’ GOP convention speech by his wife Melania is a perfect example of the infiltration that cannot be stopped.  There are other cases wherein his campaign has been surreptitiously undermined from within; these incidents of betrayal will continue to challenge Trump right up until November 8th.

Because the NWO globalists have a strict timetable in the execution of their agenda toward a One World Government, Trump — the self-professed nationalist — represents a threat so great that his candidacy is forever attacked.  These incessant assaults on his character, his competence, his businesses, his family and his presidential bearing are fictitious and performed with great deliberation.  Everything his enemies do is designed to ruin his reputation and destroy his credibility.  They have taken a slash and burn approach as never witnessed before during any election cycle … anywhere on planet Earth.

This sole indisputable factoid ought to tell the reader just how must The Donald scares the livin’ daylights out of them.  More than anything else, TPTB seem petrified of his trademark unpredictability and determined independence.  This is exactly what the globalists do not want in a POTUS.  Obama is what they wanted, as he is a perfectly controlled stooge willing to do whatever they so desired.  The lawlessness that reigns across the USA under Obama ‘leadership’ was all by design, as was the irreparable tearing of the social fabric from coast to coast and beyond.

Trump appears determined to re-establish the rule of law.  He seems to want to honor the Constitution.  He especially seems intent on rebuilding the economy, as well as closing the borders and enforcing the current immigration laws.  All of Trump’s stated presidential goals are anathema to the global elites who want to turn the USA into a plantation. Toward that end, Hillary Clinton is their ace in the hole.

Conclusion — What can The Donald Do?

Because the entire system is now set up against him, Donald Trump must enlist the aid of the people.  At the very least he must focus on the 7 major swing states that will determine the outcome of the election.  By employing a cadre of workers to execute a very specific implementation plan to prevent the election from being stolen, he can foil Clinton’s schemes.

Truly, Trump can only win with the help of the American people, not just a vote.  He already enjoys a base of unusually strong support across the country.  Only the political elites who have been forced to disavow him will not vote for him.  Those career politicians are traitors anyway so the people understand that treason is all most of them have ever accomplished.  Hence, there must be a massive house cleaning.  Both the House of Representatives and the Senate must be purged of so many traitors in the wake of a Trump presidency, especially if he is to accomplish anything of substance.

The final question then remains: How is each patriot going to play their part to take back the country from those who have stolen it?  For this coming election may represent the last chance to right the ship of state before it crashes and burns for good.  Yes, it’s that serious and more!